Hit enter to search or ESC to close

Just under a week until we take to the skies again to raise much needed funding for Tonic Music for Mental Health
please donate whatever you can afford
www.justgiving.com/fundraising/BARRYSFLYINGCIRCUS2022?fbclid=IwAR1rMmPL6861Eei5OPdu3w-uTf25qmHLEZQwtvBr9LGg22AMAmvNqlyPqJE 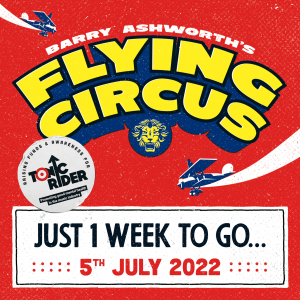 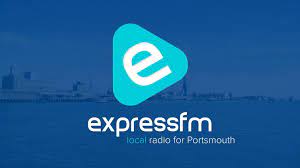 Dub Pistols have been confirmed to be playing The Glade stage at this years Glastonbury Festival in Somerset. 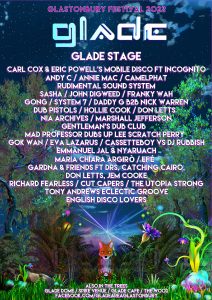 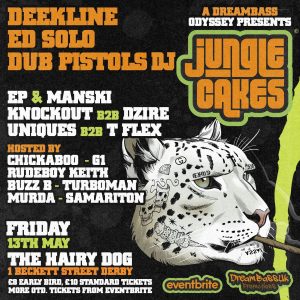 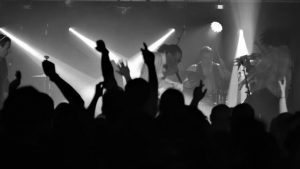 Sitting in the North East of London,  beyond the reaches of the Tube, Hackney is not a place I have visited very often. In fact I can count on one finger the number of times I’ve been there before.

We arrive by overground train, with the hipster street art of gentrifed Shoreditch rolling past the window. Hackney, as far as i know, is not really high on the list of destinations for tourists, but as we jump off the train the town is buzzing – presumably with locals. Our last train back is just after eleven, which gets us wondering what the ’till late’ on the tickets actually means.

We grab some food in a reasonably priced, by London standards, Mexican restaurant over the road from the gig and catch up with fellow groover Matt, who just happens to be going back to the same part of London as us, and is driving. Result! (he can come again!) 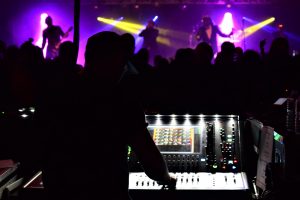 Walking through the door of the EartH (Evolutionary Art Hackney) we immediately decide we are likely to be back in the neck of the woods in the future. A nice size venue (1,200 downstairs, 750 upstairs in the theater), well laid out, cool lighting and a competent PA system.

With funding from the Arts Impact Fund and the Big Issue, Auro Foxcroft and the team behind Village Underground, renovating the space began in early 2017, after being largely unused since 1984, and opened its doors again in 2018.

The venue looks half empty, but as the Dub Pistols hit the stage I look around and it has miraculously filled up just in time.

These guys have been around almost a quarter of a century, so have had plenty of time to tighten up their shit and know how to put on a show. They inhabit a cool place just outside the mainstream, so have a large following of discerning music lovers. They have hips shaking and hands waving with original grooves and illicit knowing grins for cheeky little covers. 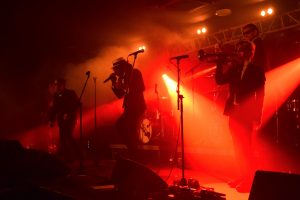 To be brutally honest, I cringed a little at their take on the Clash’s ‘Bankrobber’, but they redeemed themselves with doing a version of ‘Gangster’ which, for me, was better than the Specials original.

Guests, including Natty Campbell and Croydon’s Ragga Twins, wander on and off adding to the party vibe and keep things stirred up nicely.

It was lucky we found a Matt. They were not joking when they said it was a co-headline thing. Support bands don’t do ninety minute sets. By the time they finished, our last train was heading back into central London.

There seemed to be quite a mix in the crowd, with many coming just to see the Pistols, but there was no sign of the crowd thinning out for Asian Dub Foundation who were, to be honest, who I had come to see.

Back in 1993 there was no such thing as streaming or YouTube, sometimes you had to take a gamble. I can remember vividly reading in the NME about this cutting edge asian dub punk hip-hop outfit and rushing out to buy 1995’s  ‘Rebel Warrior’ EP and being blown away. Their first album, Facts and Fiction’ from the same year was a masterpiece that still gets an airing in Iguana HQ. 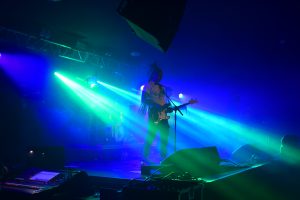 The following seven albums were all bangers in their own right but, as is often the way, that early first album retained number one spot in our heart. And then… in 2020 they released ‘Access Denied’ which caught us off guard.  It proved that a band can remain relevant for over a quarter of a century and possibly,  just maybe, is as good as that first album.

They hit the stage in dramatic style and soon have the warmed up crowd bouncing again. They may have been around almost three decades, but their mix of bangarah, punk and dub is still pretty unique and cutting edge. This is reflected in the diversity in the crowd who seem to be sharing one big grin as they bounce the night away.

The band dip in and out of their back catalogue,  with the likes of ‘Rebel Warrior’, sitting comfortably with their surprise 2020 hit ‘Coming Over Here’, featuring a sample of Stewart Lee taking the piss out of racists.

The two bands compliment each other, sufficiently different to not be repetitive,  but sufficiently similar to appeal to the same audience. Although it was ADF that was the clincher for me in terms of getting me ticket, and they put in a blinding set, I couldn’t really say either band were better than the other. They truly were co headliners. Bit of a masterstroke really. Hats off to ever came up with the idea. 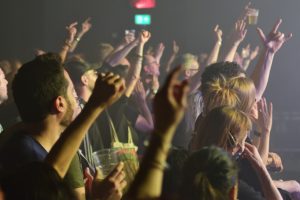 And of course hats off to Matt, for providing a lift home once the train drivers had gone to bed.

Right. I’m off to look at the venue website now to see who else they have lined up. 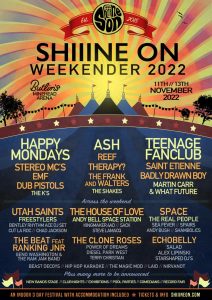 A UNIQUE Southsea-based charity that helps hundreds of people across the country with their mental health through the medium of music has ‘finally’ found a new home.

The team behind Tonic Music for Mental Health said it was ‘amazing’ to set up shop at the Frank Sorrell Centre, in Prince Albert Road, after almost two years operating online. 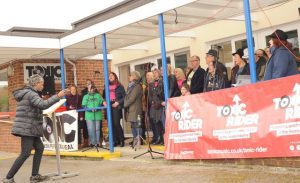 The ska choir performing at the opening of the new Tonic Music for Mental Health HQ in Southsea on March 5, 2022. Picture: Paul Windsor

This was then followed by a day of live music – featuring performances by the Tonic ska choir, Hannah Reem and Dominic Elton – and speeches from team members and supporters, including MP Stephen Morgan and TV actress Denise Black.

Musician Barry Ashworth has been involved with Tonic for nine years. He said: ‘It’s fantastic to see that they can finally get back to doing what they wanted to do before the pandemic.

‘It’s something that during Covid became even more relevant. Mental health has always been an issue but people who had never experienced it before suddenly were – whether anxiety or depression.’

The ethos of Tonic is to provide a ‘recovery-led’ music programme to help people overcome any mental health problems they are facing. 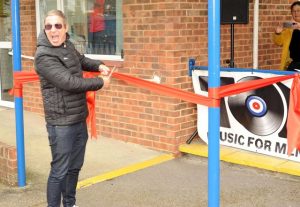 Coronation Street and Emmerdale star Denise Black became an ambassador for Tonic after facing her own mental health issues.

‘As a performer who couldn’t perform during lockdown I felt very uncertain and my mental health deteriorated with all the pressures – just worrying about the pandemic and everything.

I was asked to take part in a charity skydive for Tonic last year and that basically re-booted my mental health.

‘Music is a universal language for all of us. Coming out of lockdown I think people have realised how important music and the arts are.’

A large chunk of money allowing Tonic to run from the centre for the next year came from an incredible £10,000 raised following the death of former Duran Duran tour manager Craig Duffy, who was a huge supporter of the charity.

Craig and his partner Sue Parmiter, who used to live in Southsea, were killed in a car accident in May last year.

His son Marcus Duffy, 26, said: ‘It feels pretty amazing that even after his death we have been able to do something positive.

‘He was really passionate about Tonic.’

‘It’s great for us to be here finally – it’s been a long time coming, we’ve been desperate for it to happen.’

Prior to the lockdowns Tonic was operating from a ‘small’ venue in Highland Road.

To find out more visit tonicmusic.co.uk.

This Saturday The Pistols ride into Lincoln for the first time.

The Band will be performing at The Drill from 7:30 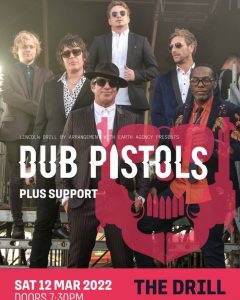 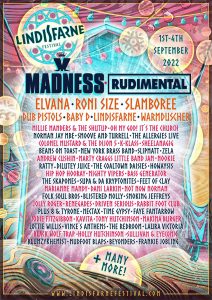 In 2022 the ultimate end-of-summer party festival will be back for it’s 7th year of music, magic & mayhem on the spectacular Northumberland coast.

Less than an hour away from Edinburgh & Newcastle, but a world away from reality, Lindisfarne Festival provides a hedonistic weekend of escapism, jam-packed with sizzling entertainment for those that dare to make the pilgrimage to our Viking-invaded shores…

With hundreds of acts over 8 unique stages, get ready for a genre-hopping mishmash of must-see performances in the UK’s best-kept-secret festival location – overlooking Holy Island! 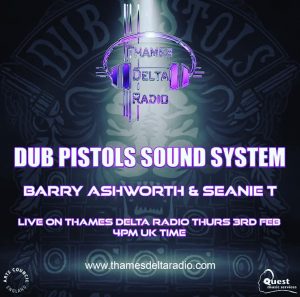