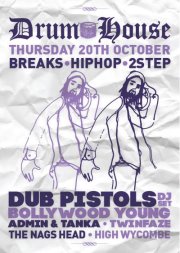 We have a real treat for the launch of Drum House this October at The Nags Head in the form of DJ Barry Ashworth the founder of the critically acclaimed ‘Dub Pistols’!

Barry Ashworth, leader and main driving force of the act Dub Pistols, spent the best part of the last decade at the forefront of futuristic musical culture, giving sets that have defied classification constantly on a specific genre and have amazed crowds from all countries and at all festivals known to man (Glastonbury, Bestival, Camp Bestival, Beatherder, Creamfields, Boomtown, Guilfest, Electric Picnic, etc.).

Barry is one of the co-owners of Westway Records and producer in a variety of aliases. He was one of the first residents at the world famous Fabric club in London, and resident at Manumission – the biggest brand in Ibiza parties.

So expect nothing less than an awesome cross genre musical experience as the ‘Dub Pistols’ sound encompasses slices of Hip-Hop, Ska, Breakbeat and more!