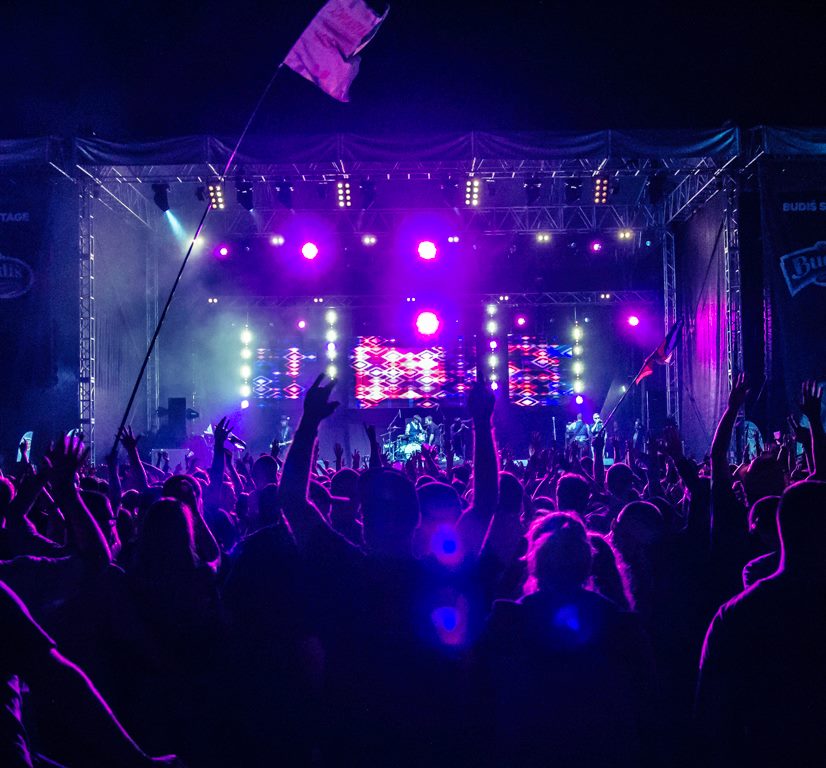 IGsoup talks to Dub Pistols’ Barry Ashworth about being in the music business for 20 years and working with his heroes.

Is this your first time at Kendal Calling?

No, not at all. We’ve played here on at least four occasions plus a couple of DJ appearances. Definitely not.

Is it your first time playing the main stage?

No, it’s about the third time we’ve played the main stage. It’s the first time we played to wake people up!

This part of the country at this time of the year, it’s something special. I don’t think there’s a more beautiful place, possibly in Europe, when the sun is shining, which is when Cumbria is at its finest. I think the location is stunning. And like I said, we’re very lucky that the weather is like it is, I’m sitting here in a t-shirt with you and its beautiful. It’s pretty special right now.

What do you have planned after Kendal Calling?

When we’ve finished Kendal, we’re leaving here to go straight to Greece. We’re doing about 3 festivals a week at the moment. We have a UK tour lined up, which will take us up to Christmas. Then we are in Australia and Europe, then New Zealand. We have a new album coming out in February. It will be our 20th anniversary next year so it’s going to be a pretty big year.

Tell us about your new album?

We’ve been writing it for ages. We’ve got everyone from Cutty Ranks, Beenie Man, Ragga Twins, Navigator, Too Many T’s, Genesis Elijah, and Seanie Tee. It’s our most loaded album in terms of guests. We’re on our 7th album and I think when you do an album you’ve gotta try and make every album better than the last, otherwise it’s pointless and you may as well give up. There is always that pressure that comes with it, but it’s our 20th anniversary next year and we’re going to celebrate. It’s a party album.

We did Worshipping the Dollar and that was when everything was tits up in terms of everybody rioting, it was 25 years since punk, I felt like we were almost going back to 1977. Return of the Pistoleros was a good album and now we’re just in a mind set to chill, write some music and have some fun with it.

How would you say your music has changed since the first album?

When the Dub Pistols had just started, it was just me. The Chemical Brothers had just come about, they’d just started doing their first track, ‘My Mercury Mouth’. I was a club promoter and I was bored of the house scene, I was bored of the scene as it had started to become very cheesy. And all of a sudden this break beat, The Chemical Brothers and Propellerheads had come about. It was just a new sound that made me think, that’s what I wanna do. Dub Pistols’ first album was never supposed to be an album for a start, and we were certainly never supposed to be a band. It was just about me, making records for the dancefloor. It wasn’t until I went to America, and signed to Geffen Records. They wanted to put a band together. I gradually started building a band but it was more like a jam session, with me DJ’ing and other people jamming along. Then it started to get messy, gradually we brought in more people and started to write songs as opposed to dancefloor 12 inches that went on forever. So gradually it’s moulded around into what our music is now. Now, we’re about writing songs. There was a point during making Rum and Coke when I realised, it wasn’t just about us writing songs for the album. It was about being a live band, so we started to focus much more on the fact we were writing songs to play, live. Not just writing songs to listen to, I think a lot of our earlier albums were down tempo, then I got to a point where I wanted to do energetic stuff and tear it up.

You’ve talked about how you gradually brought people together, how did you come together as a band finally?

Well when we were in America I was getting people to join and for many years we were complete f**kheads, we were more into partying. We would run around the pitch with the cup before we’d kick the ball, excuse me for using football terms there. But it was always about the party, then we got to a point where things weren’t right. We’d be sh**faced and people would come to see us. The oddest thing about was really that people were more disappointed when we weren’t sh**faced. My philosophy always was, I wanted to be like the Happy Mondays. The energy when I went to see them live, when I was young, it gave me a buzz and lifted everyone. We realised when things started f**king up, how many people have paid to see you. I thought to myself, this is a shambles Barry. People left, some to rehab, and new different members came in and gradually we got to where we are today. We’re constantly evolving, I don’t know where I find them!

You mentioned that you wanted to be like the Happy Mondays, are there any other artists that have inspired you?

Dub Pistols came from my love of reggae and punk, which was the fusion. To me punk is an ethic not a sound. If you try and be a punk band then you’ve missed the whole point, it’s all about fusing stuff, trying different things. Of course, The Specials had a massive influence on me, so did The Clash. But so did The Beastie Boys and The Chemical Brothers. You’re always listening to different things. Every poet is a thief. You take inspiration, whether you knowingly do it or subconsciously do it, you’re always borrowing or listening to someone else’s sound and it will add to your sound. You just do it in your own way.

You’ve talked about taking inspirations but making them your own, what does your music mean to you?

Music is the most primitive communication, which anybody can do, whether you’re depressed, upset or euphoric, it will lift you and send you on a journey. Music is the most basic, tribal beginning of every kind of communication to me. Tribes play music to listen, mourn, party and celebrate something. It’s all about being lifted and being inspired.

Can you tell us about a time you’ve felt lifted and inspired by a gig or festival you have played?

God, we do about three a week so it’s really hard to choose one. In the last year, I would say New Zealand. We went over to New Zealand and did the Splore Festival, which is on the beach. It was the first time we got to play live there, and it was a really special moment. We’re going back again this year, and I don’t think that many bands get that chance to go back again to the same festival in somewhere like New Zealand. We properly just ripped the place a new ****hole, and we were on stage with the sea in front of us. It took me somewhere else.”

Is there anywhere you haven’t played yet that you would absolutely love to?

We haven’t done South Africa, that would be great. I feel like we’ve done everywhere else! But you know, I don’t wanna stop! I need to go back and do it all again, I can’t remember half of it.

Is there any artists you’d love to work with in the future?

There’s an endless list. Ian Brown and Roots Manuva are the two I keep trying to get. Ian Brown we almost worked with. We did a remix and he was supposed to come round my house in the morning to record and his record or something went off and he couldn’t turn up. Back in the early days, we would work with people and they would die six months later… So that was an issue…

It’s well known that The Specials, are special to you. And you’ve worked with Terry Hall and Neville Staple, what did you work on together?

Terry, Neville and Lynval. We did Lynval and Terry’s first show that they had done in like 15 to 20 years in Victoria Park. It was a gig to fight racism. That was the catalyst for them getting The Specials back together again. As Terry and Lynval were walking out people were saying “oh The Specials were great“, and they were saying “nah it wasn’t The Specials it was the Dub Pistols”. They gave us a lot of credit for that, we went on to support them on tour. I got to know Neville, we toured together a couple of times, and he worked on our last album. I’ve got a track that I want Terry to work on now. I want to work with Terry again. We’ve done two or three songs together but I’m still not finished.

What did it mean to you to work with your musical heroes?

I don’t think you can have a better feeling. When you’re a kid and you have these idols. I’m still like that now, it doesn’t change. I’m still a massive fan of music and I still get really excited when I hear a good track. I was almost shaking when I had them in the room with me, when I had Terry Hall sitting on my stairs singing because my studio was in the front room. Or Horace Andy in your front room falling asleep because he’s got narcolepsy. And I had Gregory Isaacs too. There’s no words, like I said I’m this massive music fan with idols, it blows me away, I don’t feel worthy!

If there was one message you could give to your listeners what would it be?

This Dub Pistols interview was written by Lauren Scott, a GIGsoup contributor. Edited by Zoe Anderson.