Dub Pistols are set to play the most famous festival in the world this friday on the amazing Glade stage at 3pm. Its always one of the highlights of the festival season and last year saw them take the roof off the area

The Glade was spawned from the Avalon Field back in the late ’90s. In 1999 the Avalon stage featured acts like Squarepusher, Banco de Gaia, Electric Groove Temple, System Seven and Dreadzone. These shared the stage with more traditional world music and folk acts like Pops Mohamed, Peat Bog Fairies, Martin Carthy and Roy Harper. It was a proper eclectically mixed festival stage and exemplified the buzz and excitement of the blending genres of music at the time. 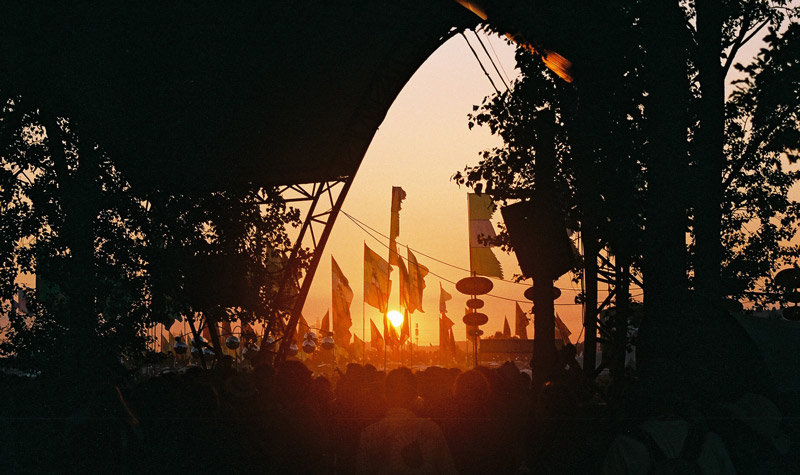 Michael Eavis recognised the Avalon stage music was moving away from its usual pure ‘folk’ music and he and Luke Piper, the area organiser, decided to start a new area further along the railway towards the Other Stage. Using the small triangle of poplar trees and mature woodland tucked below the embankment they named it the Glade.

Inspired by new cutting-edge music and technology they designed and built unusual stages and structures to fit the space and experimented with surround sound, projections and visuals in a totally new way. The stage hosted relatively unknown and underground acts as well as the likes of Orbital, Eat Static, System 7 and The Orb. True to the ‘free party vibe’ The Glade Lounge tent has always had a core psy trance and chill out programme. The Avalon crew still run Glade as well and it’s now a whole area. In 2011 it hosted the Sprit of 71 to mark the first Glastonbury Fayre in 1971.
In 2014, two new venues – the Spaceport and The Spike – were introduced to the Glade area. Spaceport plays on the extra-terrestrial, futuristic and virtual-reality with some nightclub glam thrown in for good measure. The stage and bar is actually inside a spaceport terminal and its great interstellar soundproofing gives the full benefit of an amazing late night line-up.

The Spike, hidden in another woodland space nearby has been decked out with a bandstand, walkways and bridges. Like Yoda’s Den it’s an enchanted ferny dell with twinkling, fairylights and lush coloured washes in a swirly mist of dry ice smoke. A haze of Spike cocktails will reveal some of the most unexpected highlights of the festival (Aphex Twin played last year until 3 o’ clock Sunday morning).