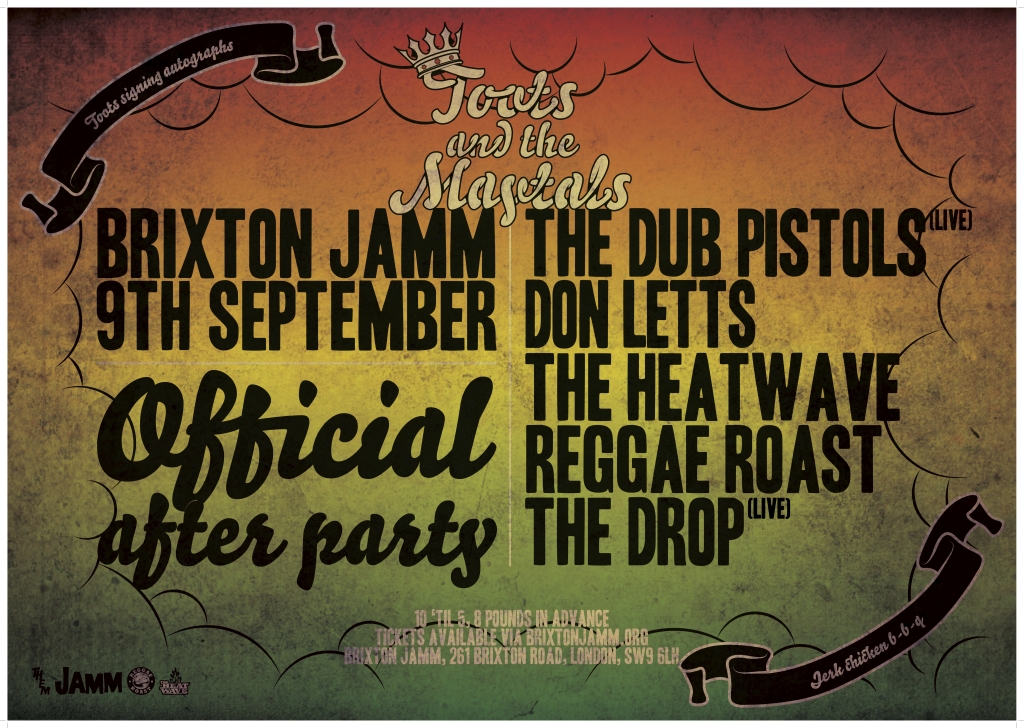 THEM LONDON PRESENTS
THE OFFIFICAL TOOTS AND THE MAYTALS AFTER PARTY
Toots and the Maytals, the legendary Reggae innovators, and one of the greatest bands of its kind the world has ever seen, are coming to London to play a packed Brixton Academy.

To celebrate this amazing event, top Brixton nightclub Jamm and popular Bass Music promotion crew THEM have teamed up with Toots himself, to make sure the vibes can continue into the night.

With such a legendary Reggae act, we are proud to have the opportunity to present the best possible Reggae music talent from right here in the UK, all under one roof. As Takes on a slightly more after hours take on the sound, to up the volume and push the tempo. London pays homage to these originators, with the fruits of their influence. Donation made to the Toots Foundation, Toots’s own charity providing aid to under-privileged youth in Jamaica.

Toots Himself Will be Signing autographs in the Venue!

The Line up:
The Dub Pistols(live) – headlining our night is the infamous Dub Pistols. The Dub Pistols play on that other famous Jamaican sound, Dub, combined with big beat sounds, and Ska revival influences to create live music which Is concentrated party dynamite.

Don Letts – Credited as the man who brought together Punk and Reggae music, Donn Letts has since become a legendry DJ and figure in London’s music scene. Also a hugely accredited filmmaker, Don Letts continues to bring parties alive with his DJing, and we are very pleased that Donn Letts has agreed to come and play homage to Toots and the Maytals by doing so.

The Heatwave – The UK’s number one Dancehall Bashment sound. Everywhere they go it’s a carnival. For a whole hour its going to get tropical in Jamm. Who says pull up?

Reggae Roast – One of London’s Flagship Reggae Soundsystems, well known for their popular East End parties cruise across the land from playing Bestival to smash the dance.

The Drop (live) – Having previously supported Toots & the Maytals live, The Drop are also one of David Rodigan’s favorite new UK Reggae live acts. A full 7-piece live show with horn section and some awesome tunes, one of which has seen airplay on Kiss FM an Giles Peterson’s Radio one show.

Plus Room 2 Showcasing the finest UK rave music which has been influenced by roots and reggae. Including:
Lud Dub (USA/Urban Nerds) – Jungle and Dancehall
We Are Dubist – Dubstep, Jungle & Hip Hop
Back Masa(live) – Funky, Tropical, Bass.