The Dub Pistols have built a massive fanbase in the West Country by putting in the hours and respecting their audience. Barry Ashworth talks to Fergus Byrne about energy, music, football and music royalty—and, what could possibly go wrong? 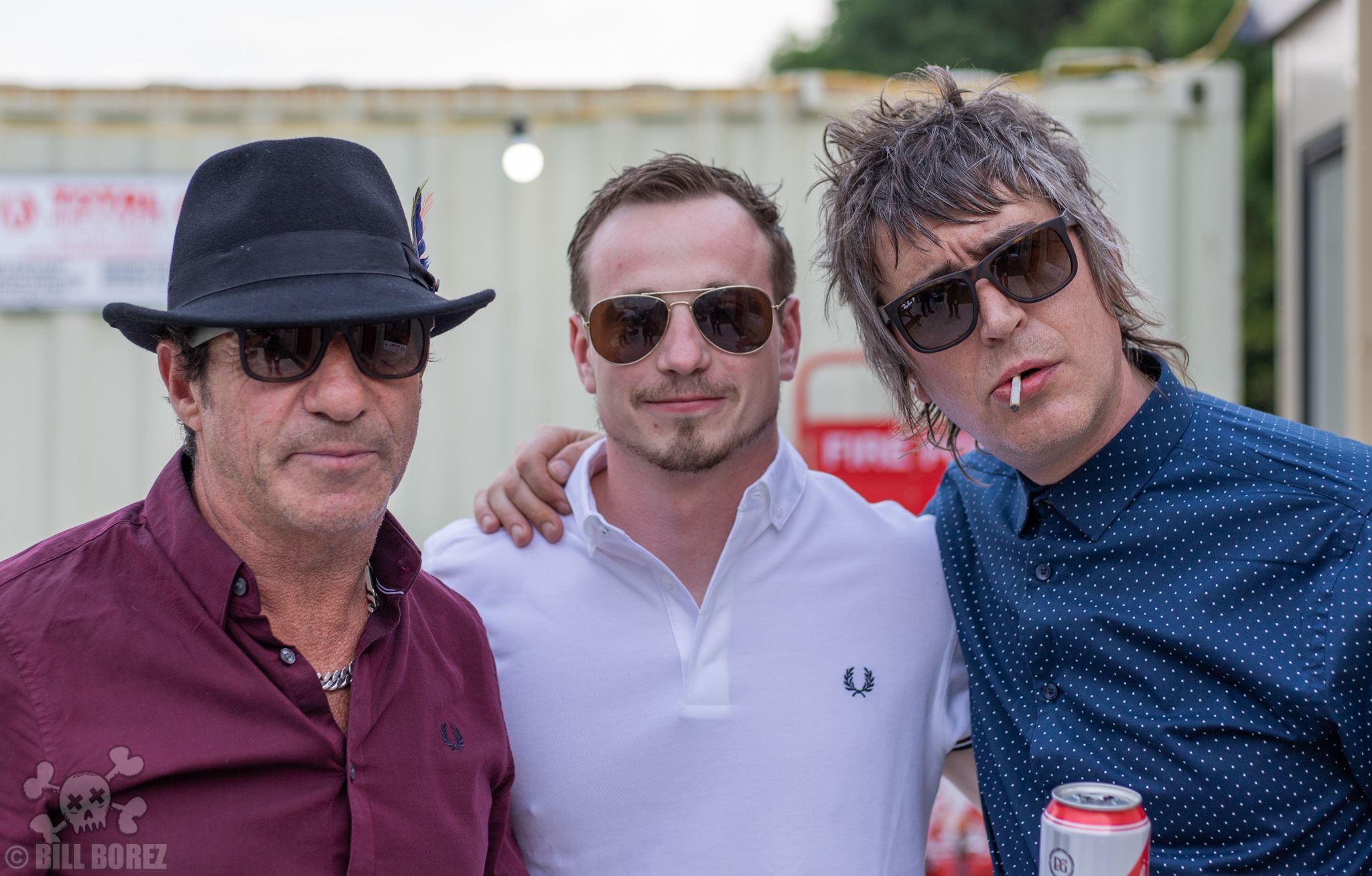 Over the years it’s fair to say that Barry Ashworth, the driving force behind the Dub Pistols, might have owned up to a number of different chemical excuses for his boundless energy, but these days the bulk of his drive and stamina just comes from a natural source—his passion for music. ‘My Mum used to have to give me Valium to go to school to calm me down’ he jokes. ‘I’ve always been bouncing off walls. That’s just naturally in my personality.’

In July Barry brings the Dub Pistols to Bridport to headline at the Jurassic Fields Festival. It’s a gig he’s looking forward to. ‘The West Country seems to be our biggest catchment area in term of fanbase I think. When you go north there’s a lot more house music, but when you go more west, it’s a lot more urban and open-minded. Our sound seems to have connected and resonated with people and it’s been like that for quite a while. We do a lot of shows down that way every year.’

The band originally grew from Barry’s DJ career, which itself grew out of time spent running clubs in Ibiza and London. If it was possible to create an edited version of his life story it would start on a London council estate, take in teenage dreams of a being a footballer, include a broken leg in 1987 and a trip to Ibiza that changed his life. That was eventually followed by a million-dollar contract with Geffen records in America and the heady road to sex, drugs and rock ‘n roll. However, as luck would have it, Barry’s first shot at mega-stardom was interrupted by the attack on the twin towers of 9/11, as the Dub Pistols first album was due to be released there that week. Coincidentally having lyrics like ‘Submarine sinks fall from the sky/tallest buildings burn/oh how the mothers they cry,’ and ‘blowing up the White House like I was an alien in Independence Day’, the album was pulled and it never came out. Barry found himself back in London with an unexpected overdraft and one hell of a ‘what happened last night?’ feeling. He admits it had been some party though. Cut to today and the Dub Pistols have risen from the ashes of those dark days and built up a huge following by being one of the hardest working bands in the industry. 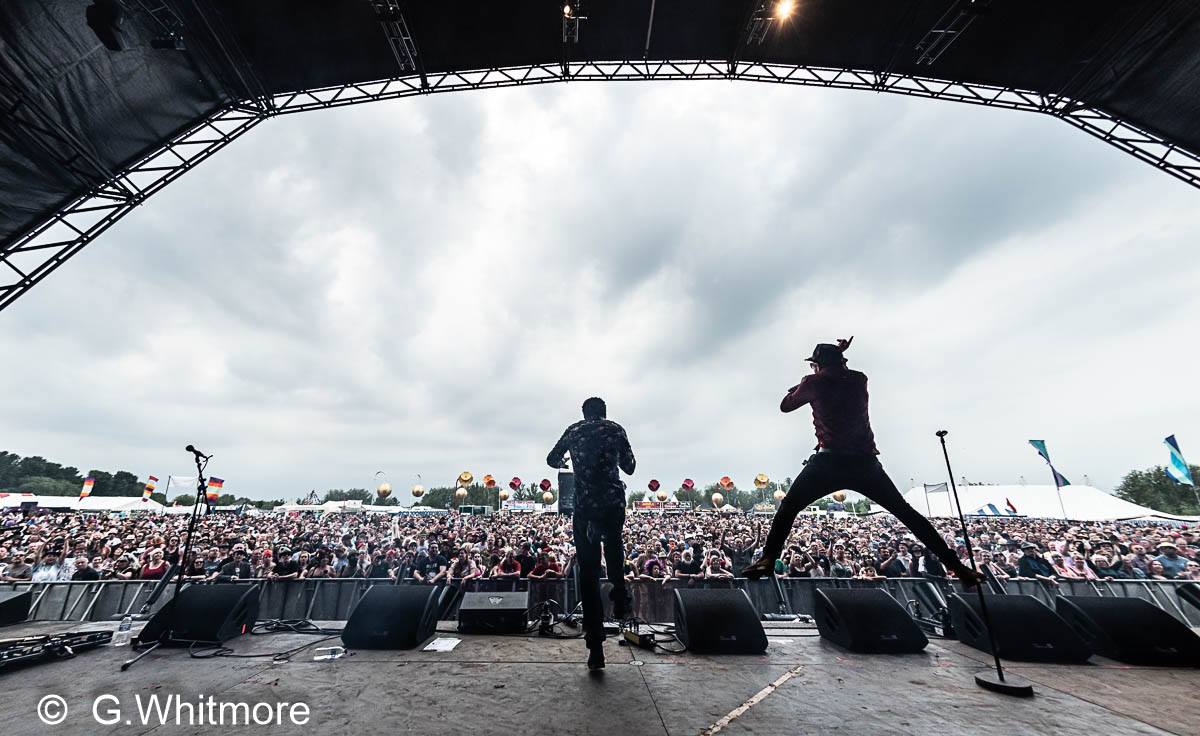 Dub Pistols live performances are all about the crowd. ‘Our show is very much built on energy and crowd participation’ says Barry. ‘We feed off the crowd as much as they feed off us.’ He explained that every band he has ever been into, from punk to ska, is always about energy. But that doesn’t mean it’s not also about the music. ‘For me, music is the soundtrack to life. Whether it takes you up or whether it takes you down, you can always reference different parts of your life through the soundtrack of that time. Making music is something that I love and always have done.’

Although the soundtrack to his early years included people like Elvis Costello, The Clash and Blondie et al, his Dad had different ideas about what he should be listening to. ‘When I’d come home drunk on a Sunday and be upstairs playing reggae, he’d drag me downstairs and play me Lynyrd Skynyrd and Rory Gallagher and say “that’s not music, this is”. My Mum was more into Motown and Soul’. That’s not to say Barry didn’t listen to anything other than punk, reggae and ska, he admits to a very eclectic taste in music. ‘Bob Dylan was a soundtrack for a time’ he says. ‘From that, you learn a lot about songwriting and lyrics and you become a bit more socially aware. And my grandmother was a Scouser, so there’s a heavy influence from there with the Beatles as well. My grandmother was carried down to You’ll Never Walk Alone’.

Talk about his Scouser background and the Liverpool theme tune brings us neatly to the other passion in his life—football. That broken leg in 1987 brought him to Ibiza to recuperate and he readily admits that the drug scene and the fantastic mix of music on the island put an end to his football dreams. However, it didn’t curtail his passion for the beautiful game. He is still a fanatical Liverpool supporter, but when it comes to the organisations that run the industry he practically spits out his views. ‘I hate the FA with a passion’ he says. ‘I hate FIFA with a passion, because they are, to me, so corrupt.’ He believes the teams in the past such as those in the Beckham era and managers like Terry Venables could have kept England as contenders ‘but they just wanted “yes” boys. So it’s just really put me off international football.’

With the 2018 World Cup kicking off as we chat, it’s probably not the best time to be irritated with International football and Barry at least concedes that maybe there could be some hope. ‘I don’t actually think we’ve got the worst team in the world’ he says. ‘I think we’ve got quarter-finals in us. It really depends on what he (Gareth Southgate) sends out and how they decide to play. The good thing is none of them deserves an ego, cos let’s face it, they’ve been shit. The warm-up games they’ve struggled to win by one goal.’

By the time this goes to print we’ll all have a better idea of what England might achieve. However, regardless of the international football scene, Barry can’t help but throw a more amusing aside to the football chat, complaining that ‘every time there’s an international break, Liverpool seem to come back with our best players crocked, so I hate it.’

So, enough about football, but did a shot at mega-stardom in the music industry leave Barry or any other Dub Pistol with an ego the size of, say, Kanya West’s? No, not at all. Barry Ashworth is under no illusions about the slippery slope that fame and stardom offers. This is a hard-working band that pulls it all off by putting in the hours and loving what they do. As to mega-stardom, Barry is often quoted as saying they are ‘successfully unsuccessful’. He points out that the lack of international limelight means ‘you don’t get overkill and it doesn’t let your head get too big, because you have to live it real. The way that we have to travel and play, we’re never the spoilt superstars—we’ve never had people blowing smoke up our arse.’ That’s probably why the fans keep coming back and as he says, ‘the shows just get bigger and bigger—which is unbelievable after twenty years.’

Last year Barry got married, as it happens into music royalty. His wife’s mother, the late June Child was married to Mark Bolan and his wife’s Godfather is Elton John. ‘They were just a little bit more successful than me’ he laughs. So does he fancy the idea of being a bigger star? ‘Would I like to have my life analysed, considering what I’ve been up to?… Probably not’ he says. ‘I think I’d just be banged up. Staying just below the radar suits me just fine.’ 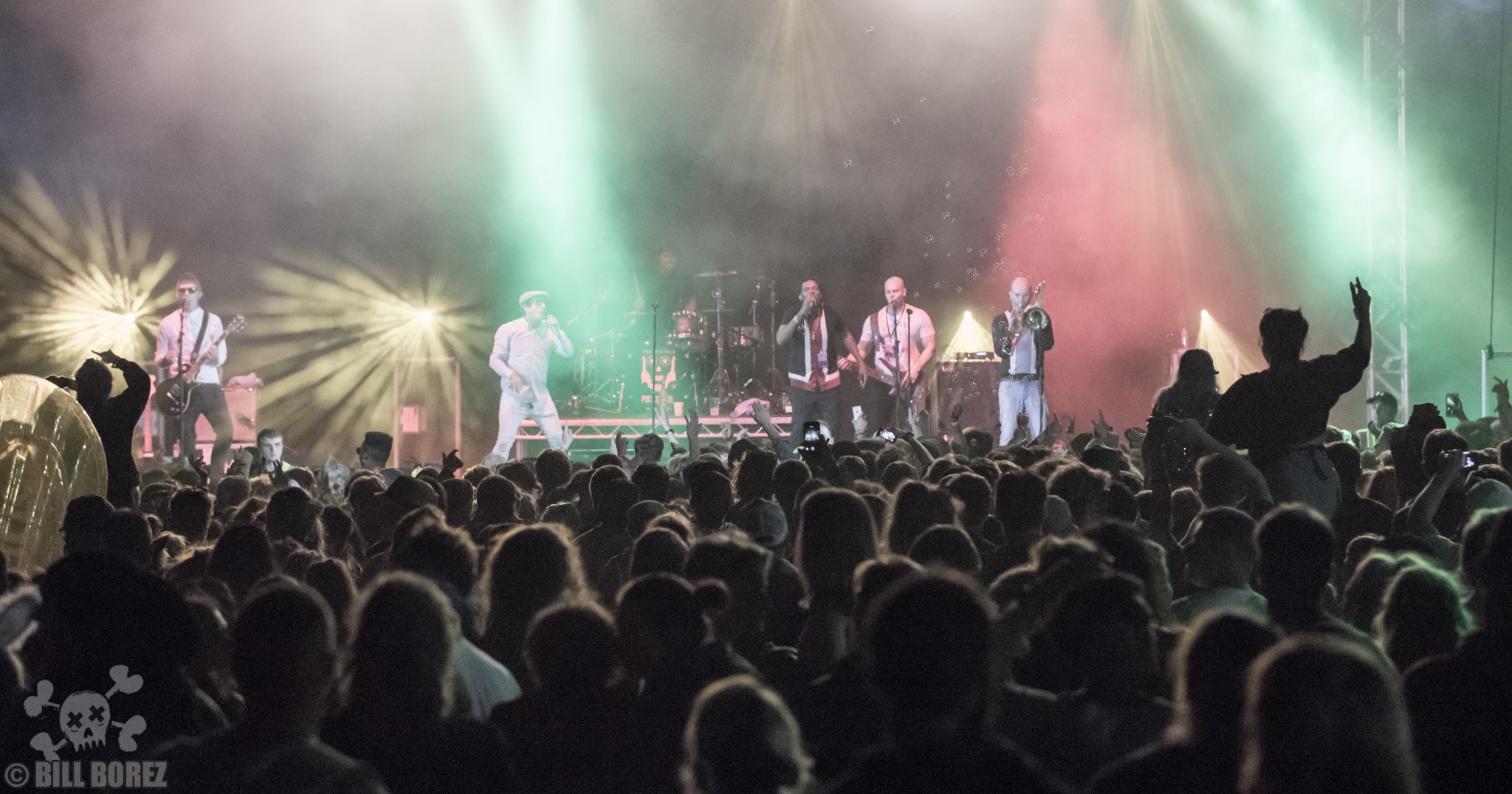 Looking at the rest of the year it would seem that the Dub Pistols may be a little too busy to peek over any radar. As well as a seemingly never-ending trail of shows in the UK, there are gigs in Poland, Romania, Italy, the Netherlands and Portugal, and talk of shows in Mexico and New Zealand in the New Year. Not to mention the new album Dark Days, Dark Times, which Barry says is already ten tracks in, though not due out until early next year. Then there is also the band’s documentary What Could Possibly Go Wrong?, a history of the Dub Pistols so far, which, as Barry says, is hard to finish since the band is still going. He has set himself a target of the gig at this year’s Boomtown for the last bit of filming and hopes to get it finished before the end of the year.

In the meantime, there are still songs like Never Never, London Calling, Boom and Rising from the current album Crazy Diamonds that have found their way into the Dub Pistols live set. Simply, not to be missed.

Anyone who hasn’t yet managed to connect with a Dub Pistols gig should remedy that particular hole in their personal ozone as soon as possible. Now fully-fledged ‘festival favourites’ they will play at Jurassic Fields in Bridport on July 13th and Camp Bestival at Lulworth at the end of July, as well as Beautiful Days at Escot Park near Ottery St Mary in August. Find out more at www.bridportlife.co.uk/coming-up/dub-pistols-looking-forward-to-bridport-july-13/