Dub Pistols have been announced as friday night headliners in the Big Top at the Larmer Tree festival.

This is the bands 3rd appearance at the festival and their first headline spot in the Big Top. 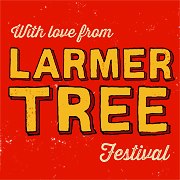 The Festival takes place over 4 days from the 16th till the 20th July and the dub pistols will preform on Friday 18th July.

After storming our festival Launch party in March, the infamous Dub Pistols are headlining the Big Top on Friday 18th July.  Since we last saw them, they’ve toured Europe, including dates at Snowbombing in the Austrian mountains and Barasti Beach Bar in Dubai, and now they’re gearing up for festival season. These guys seriously know how to party, so if you’re in the Big Top on Friday night, make sure you’ve had your Weetabix – front man Barry Ashworth can’t resist a crowd surf!  Dub Pistols info >

For more info go to the Festivals official website http://larmertreefestival.co.uk/news/