DUB PISTOLS TO HEADLINE “OFF THE TRACKS FESTIVAL” 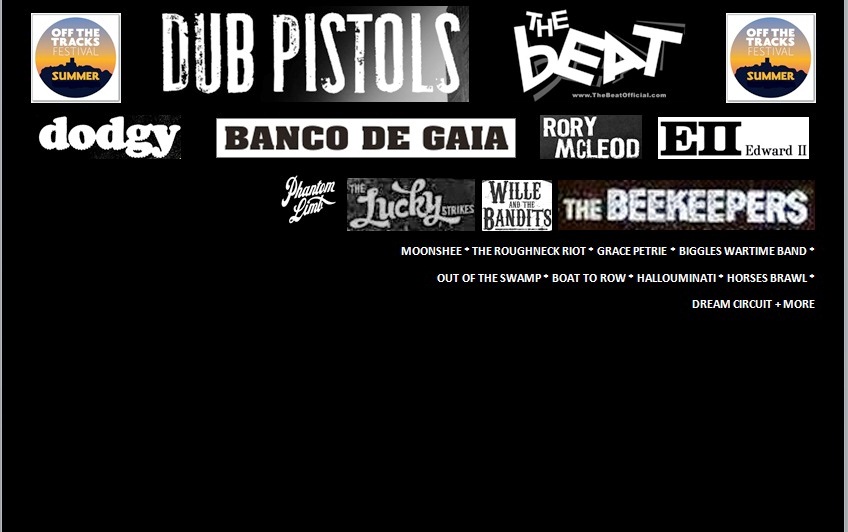 Dub Pistols are today confirmed as the final headline act for Off The Tracks Summer Festival.

The London band will close the main stage on Saturday night, following their phenomenal show at Off The Tracks Spring Festival in May.

Festival director Andy Cooper says: “Dub Pistols’ performance in May was one of the most memorable we’ve ever had – more than two hours, with four encores. We thought long and hard about the Saturday night headline act for the Summer festival, but in the end there was no doubt and we’re proud to welcome them back.”

Dub Pistols’ founder Barry Ashworth says: “It’s fantastic to be invited back to headline Off The Tracks so soon. The response we got from the crowd at the May festival was off the scale and we’ve been buzzing about it ever since.”

Off The Tracks rounds off a busy summer for Dub Pistols, who are touring and playing festivals in support of their critically-acclaimed new album ‘Worshipping The Dollar’, released on Sunday Best Records.

Off The Tracks, celebrating its 24th anniversary in 2012, takes place at Park Farmhouse, Isley Walton, Derbyshire, from August 31-September 2.

Also on the bill are The Beat, Dodgy and Banco De Gaia, plus Rory McLeod and the Familiar Strangers, Edward II, Phantom Limb, The Lucky Strikes, The Beekeepers, Moon’shee and more.

Off The Tracks offers more than 40 artists on three stages, impromptu acoustic sessions as well as 80+ real ales, ciders and perries, excellent camping facilities and a relaxed, family friendly atmosphere. Food on offer includes venison reared in the venue’s own historic deer park.

Advance weekend tickets are priced £70. Advance youth tickets are £40 (12-16 years old). Admission is free for under-12s. Tickets are available now from www.offthetracks.co.uk and all parking and camping is free for advance ticket holders.