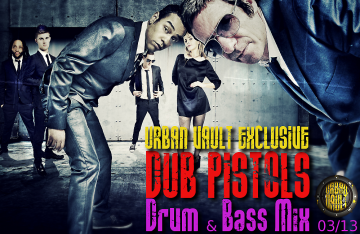 After winning Best Live Act 2012 at last weeks International Breakbeat Awards by Breakspoll, we have a special and exclusive Urban Vault mixtape from Dub Pistols. The mix includes the massive new digital single ‘Gunshot’ out now on Sunday Best Recordings.

‘Gunshot’ is the third single to be taken from last year’s acclaimed 5th studio album ‘Worshipping The Dollar’ and will immediately transport you to the sun-kissed beaches of the Caribbean; marrying tropical trumpet melodies, muted guitar licks and down-tempo DnB beats. You can check it out for yourself over on Dub Pistol’s SoundCloud, and comes complete with remixes from Isaac Maya (who also features in the mix), Jinx In Dub, Adam Prescott, J Star and Jagged Hedz.