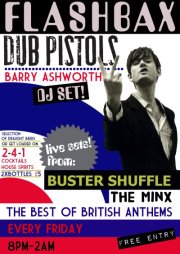 Flashbax ‘The Best of British Anthems’ with The Dub Pistols.

It’s been a fantastic year for Barry Ashworth and his band Dub Pistols. Barry and the band have been round the world 5 times playing in every country imaginable, they have headlined festivals, been nominated for awards and have released their fourth studio album. For some artists, these things are just pipe dreams, but for Ashworth and the Pistols, things are only justgetting started.

Dub Pistol’s front man Barry Ashworth will be spinning the tunes for this brilliant edition of Flashbax. Supporting with be ‘rockney’ geezers and London’s favorites Buster Shuffle and those noisy naughty boys from Manchester The Minx. A mix of ska, reggae, hip hop, Brit anthems and rockney!

We Like: The Kinks, The Who, Oasis, Pulp, Blur, Supergrass, Happy Mondays, The La’s, Primal Scream, The Auteurs, The Bluetones, Black Grape, Dodgy, The Verve, The Inspiral Carpets, Weller, Cast, Suede, Elastica, Ocean Colour Scene, Ash, The Lightning Seeds, Kula Shaker, Shed Seven, Embrace, Seahorses, The Charlatons and Gomez.
Come and get your swagger on…..