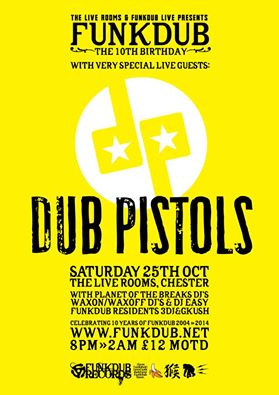 Funkdub celebrates a decade of dominance with the Dub Pistols live.

The Funkdub DJ and music promotion outfit will mark ten years of incredible music performances with a special anniversary event headlined by Dub Pistols on 25th October at Chester’s Live Rooms.
Funkdub have been DJing and hand-picking the finest live acts to enthral appreciative crowds in Chester, the North West and beyond since 2004. Founded by 3DJ and Gentleman Kush to change the region’s musical landscape, the Funkdub experience has played alongside a range of cutting edge acts, including Dreadzone, Pama International, Max Sedgely & The Shoots, Little Barrie, Craig Charles, The Beat, Coda and The Skints.
Dub Pistols have gained acclaim and notoriety in equal measure for their unique brand of hip hop, dub and ska, manifested in an unrelenting punk attitude. They are consistently considered one of the finest live acts in the UK, and are touring their sixth and latest album, Return of the Pistoleros.

The London/Brooklyn collective’s critically-acclaimed back catalogue features collaborations with Specials founder Terry Hall, reggae legends Horace Andy and Gregory Isaacs and UK rap stalwarts Rodney P and Blade. Renowned for their covers as much as their reggae-fused original tracks, Dub Pistols take classic singles, like The Specials’ “Gangsters”, The Stranglers’ “Peaches” and Blondie’s “Rapture” and make them truly their own.
Dub Pistols’ are also sought after producers, remixing tracks for acts as diverse as Ian Brown, Lily Allen, Banco De Gaia, Limp Bizkit and Korn.

Joining the band at the ten-year anniversary event will be a hand-picked range of Chester’s top DJ talent, all of whom have been instrumental to Funkdub’s success in the industry, including Planet of The Breaks (Deviant & Stet) and DJ Easy.

Of course, the Funkdub DJs themselves will also be providing support before and after the show with their trademark vinyl extravaganza.