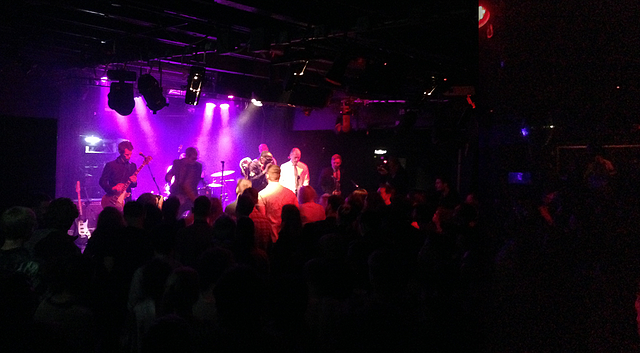 Dub Pistols made London Camden Dingwalls dance crazily the whole night, as they kicked off their much awaited 2015 tour The Return of the Pisterols, performing a fusion of hip-hop, dub, ska, jungle set with some bonus reggae riffs thrown in. The big band on stage consisted of lead singer Barry Ashworth giving an energetic performance, along with the musicians, which included a very prominent performance from the trombones, giving the band a completely different, unique vibe than any other band currently touring. Even the man in the sombrero brought out to warm the crowd and take part in the performance added a unique spark to the band’s concert.

The Dub Pistols were surprisingly dance-floor friendly; something unexpected of music from live bands. The reggae riffs with the guitars and the tunes from the brass had the crowd grooving, with every person in Dingwalls dancing madly along to the music, proving the intense energy that Dub Pistols brought to their performance. The heavy bassline was reminiscent of the pure, live band music that is really what defines music in the first place, yet Dub Pistols successfully were combining this with their special, electronic dub feel (as hinted at by their name).

Dub Pistols are one of the true survivors of their genre, starting out in the 1990s yet still selling out nationwide tours, delivering what was expected of them and more. The crowd went crazy with each song, and was composed of evidently long-term and dedicated fans who were singing along word for word, tone for tone, going particularly wild for the closing jungle song “Mucky weekend,” chanting the lyrics “Oh no here we go again” with the song at top volume. Dub Pistols as well attracted a really young, fresh, crowd loving the ska musicality and dub beats, showing their fan-base to be ever-growing, appealing to a wide range of musical tastes.

The Dub Pistols caught its audience for the whole evening delivering a two hour set, with an only growing level of energy, leaving the audience buzzing and in love with the musicality and dance rhythms made from the ska, jungle songs about boozing, ecstasy, and all that illicit stuff, proving themselves to be one of the UK’s most unique bands.

Dub Pistols’ album The Return of the Pisterols will be released 1st June 2015, and is available for pre-order now!
To find out more about the band, and hear some more of their music, visit dubpistolsmusic.co.uk