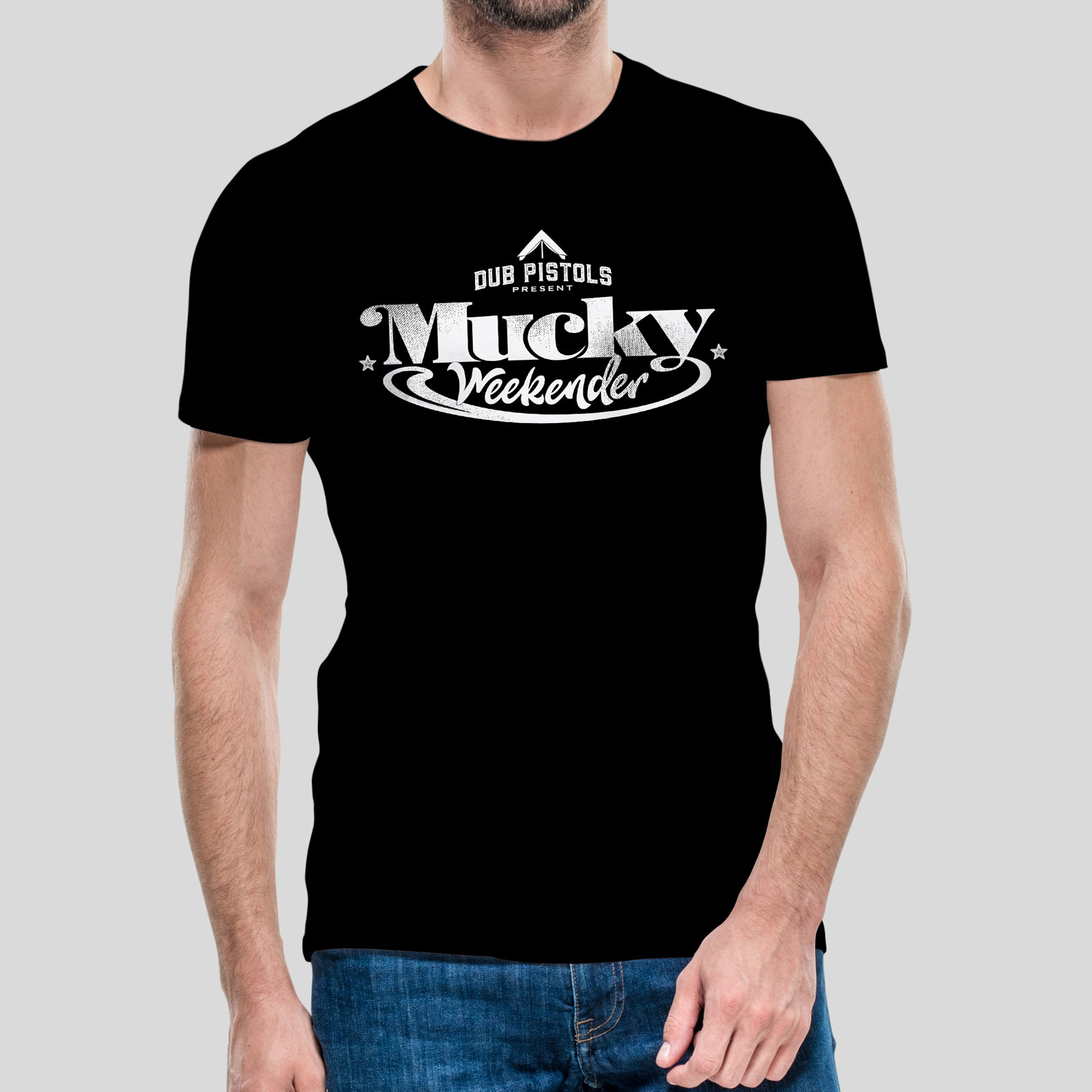 We have release a limited edition Mucky Weekender t-shirt available in Navy and Black ahead of our Festival in September. Make sure you grab a tee and a round up your friends to join us in Winchester on September 10th & 11th 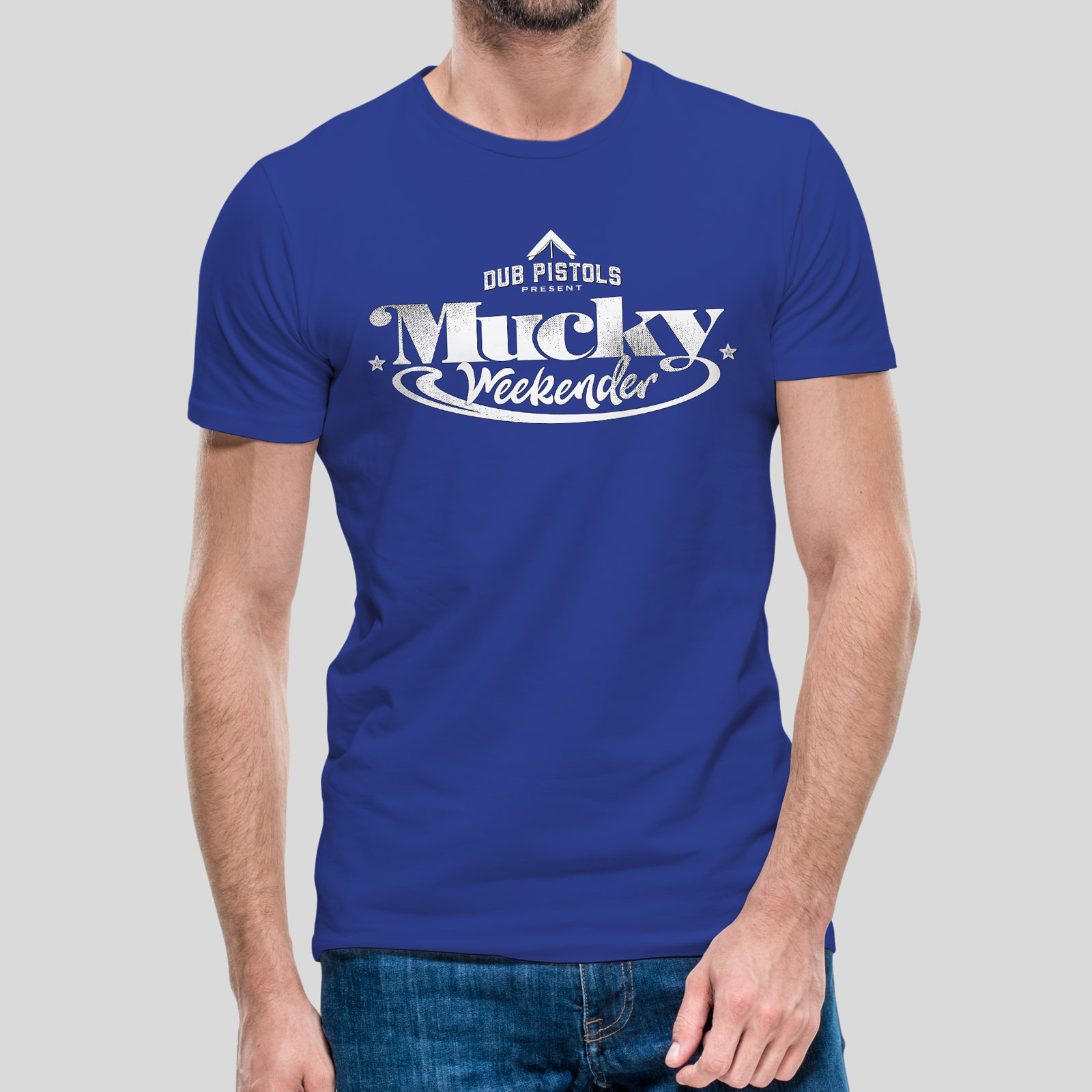 Mucky Weekender Music Festival Fri 10th and Sat 11th September 2021
An Indian summer, Ibizan Vibes and Amazing Music!
Mucky Weekender Music festival – curated by Dub Pistols’ legendary frontman Barry Ashworth – returns for its second year this September, to a stunning new location set within 28 acres of private parkland near Winchester.
The festival is named after one of Dub Pistols’ biggest and best selling singles, Mucky Weekend. The band decided to create and host their own festival in 2019, using it as a way to connect with their fans, The Pistolero family, and showcase both established and new musical artists over the two days.
Barry Ashworth says, “Everyone’s a star at Mucky Weekender. I’m a strong believer that the crowd are just as important as the performers. Everyone has a smile on their face and are full of love. It’s the kind of festival you could go to alone and leave with 1000 new friends. We are really excited to host this event and can’t wait to put a smile back on peoples’ faces”.
World class DJs and live performers have been carefully curated to maximise the party vibe, with some of the best music, past, present and future. Stages will feature Happy Mondays icon and indie national treasure Bez, who will be bringing his ‘Bez’s Acid House Party’, Terry Farley, The Prodigy’s Leeroy Thornhill, Krafty Kuts, The Clash/BAD’s Don Letts and many more. The main stage has live performances from festival hosts Dub Pistols, electronic music group Freestylers and festival favourites The Cuban Brothers amongst others.
The new site in Winchester could not be more beautiful, set in 28 acres of private parkland and stunning countryside. Says Barry, ‘our ethos is very much one of ‘leave no trace’, and judging by our first year it’s an ethos the crowd fully embrace too. Our last site was left cleaner on departure than when we entered it.’
This philosophy has continued when considering how to keep the site COVID safe, without compromising the relaxed and free spirited atmosphere of the festival. The organisers have taken the decision to limit the festival to 3000 ( 60% of capacity) in order to help revelers maintain social distancing.
In addition, other precautions have been taken, including walk through scanners to avoid physical contact on entry. Great care has been taken to install top quality facilities, including 5 star food outlets and posh showers & loos, which will be cleaned regularly by a dedicated team operating onsite throughout the festival. The big top will be open-sided to make free movement and social distancing easier, and the bar will operate a oneway system designed for safeguarding.
Whilst soaking up the atmosphere Mucky Weekenders will also be treated to an array of street performers, including magic, comedy and an extra special art installation nestled in the woods called “The Shack”, created especially for the festival by Arlen Figgis, son of renowned British director Mike Figgis.