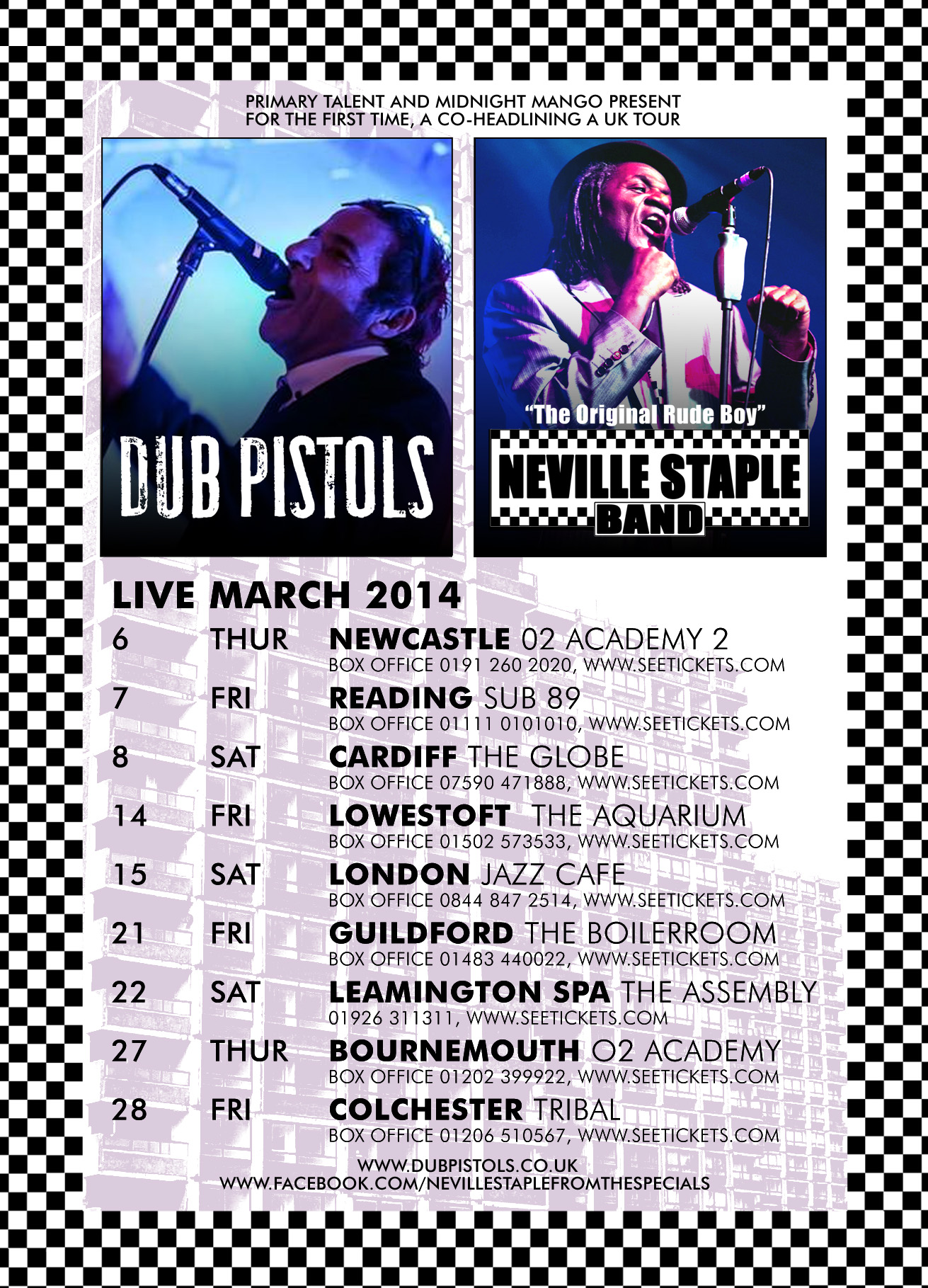 Notorious party-rockers head out on UK tour with ska legend

There’s gonna be some serious skanking going down at all the dates of this twin-pronged ska-tinged tour. Party-rockers the Dub Pistols — who mash-up ska, punk, hip-hop, breaks, dub, drum & bass and more — are heading out for some UK dates in March with ska legend Neville Staple from The Specials.

As a slightly wayward teenager, Dub Pistols main man Barry Ashworth was heavily into multi-racial 2-Tone ska band The Specials. Never in his wildest dreams did he think that one day he would not only work with several key members of the band, but be instrumental in the reformation of The Specials in the late noughties too.

The Specials are one of the most influential bands of all time. Bursting out of Coventry in the Midlands region of England in the post-punk late seventies, their conscious ska tunes caught the imagination of disaffected British urban youth. They quickly had a top ten hit with “Gangsters’ on their own 2-Tone label, which would soon also put records out by The Selecter, Madness and The Beat. These 2-Tone bands — along with the label’s iconic logo, the skinny Walt Jabsco figure in black suit, white socks and pork pie hat — caught the imagination of the nation’s youth and 2-Tone was soon a bona fide movement.

The first Specials album in 1979 was a landmark release. Mixing up a couple of rocksteady covers of Prince Buster, Skatalites and Toots & the Maytals tunes with their own compositions, it’s still featured on many Best Albums Of All Time lists. Deadpan lyrics from skinny white vocalist Terry Hall were offset by the rudeboy toasting of Neville Staple and the animated antics of foregrounded vocalist/guitarist Lynval Golding. The whole ska-punk show was masterminded by keyboard wizard Jerry Dammers, who took the band’s sound into more of a cosmic, easy listening ‘muzak’ territory for second album, ‘More Specials’.

After their seventh consecutive top ten hit, the haunting tale of urban decay that was  ‘Ghost Town’, peaked at No.1 just as the UK was engulfed by inner city riots in 1981, The Specials broke up with Terry Hall, Neville Staple and Lynval Golding going on to found hit-makers the Fun Boy Three for a few years.

Barry Ashworth, meanwhile, formed the Dub Pistols in 1996 after previously promoting parties, singing in acid house band Déjà Vu and teaching himself to DJ. At first the Dubs surfed the big beat wave with block-rockin’ tracks like ‘Cyclone’ and ‘There’s Gonna Be A Riot’, but for their broader ‘Six Million Ways To Live’ album Barry managed to recruit a certain Terry Hall — one of his all-time heroes — to guest on Dubs ska tune ‘Problem Is’.

Terry began guesting with the Dubs at live shows, and soon they started performing ‘Gangsters’ too — the first ever Specials single. Hall contributed a number of tracks to the next Dubs album, ‘Speakers & Tweeters’, and Lynval Golding also joined the Pistols on stage a few times — at Bestival and the anti-racism festival Rise in London — to play guitar and contribute vocals to ‘Gangsters’. Terry Hall is on record as saying that singing live with the Dubs in the noughties made him realise how much love there was out there for his short-lived former band, and this was instrumental in one of the biggest reunions of modern times — The Specials reforming.

Indeed, the Dub Pistols were asked to support The Specials at some of their early reunion shows, and in the summer of 2013 Neville Staple asked Barry to sing ‘Gangsters’ onstage with him at his Glastonbury show.

Mixing up drum & bass, dub, ska, punk, hip-hop and electronics, the Dub Pistols are like a 21st century version of The Specials. Their love of 2-Tone might only be one element of their sound, but their next single — the lead track off their forthcoming ‘White Lines’ album on Sunday Best — is a collaboration with Neville Staple himself. Seeing as Neville also has a new album out on Casablanca Records in March, it made perfect sense for the Neville Staple band to head out on tour with the Dub Pistols. Neville’s band performs many classic Specials tracks along with some choice ska, reggae and rocksteady standards.