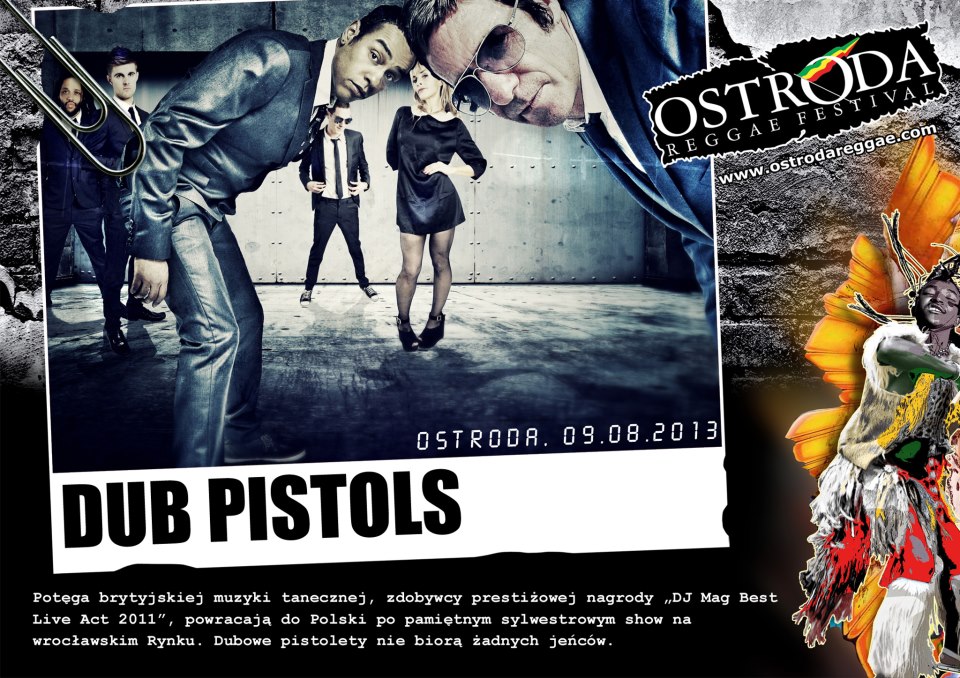 THE BIGGEST LINEUP AND THE BEST ATMOSPHERE FOR REGGAE IN POLAND

For 12 years Ostroda Reggae Festival has been a regular destination for summer pilgrimages of Jamaica-originated music followers. Over the time the event has built a reputation as the largest of its kind in Poland and one of the largest in Europe. Dozens of acts from all around the world, high artistic level, significant number of side activities, relaxing atmosphere and exceptional location in the “Pearl of Masuria” (as Ostróda is called) – it all sums up for the festival’s success and makes thousands to attend every year. ORF trademark nowadays is recognized not only in Europe, but also in other continents. The result is growing interest from both artists and large international audience visiting Ostróda.

Using the language of reggae, our festival promotes respect, tolerance and peaceful coexistence of all nations, nationalities and colors of the skin.
12th edition of the event will be another step in the development and offers a massive lineup on a scale not seen in Poland yet. This year we are planning shows of 55 acts on two main stages from Poland, Jamaica, UK, USA, Spain, New Zealand, France, Germany, Switzerland, Ireland, Senegal, Guadelupa and Antiles.

The extraordinary musical family MORGAN HERITAGE already appear to be one of the highlights of this year’s edition. Same top quality show one should expect after FAT FREDDY’S DROP – the most popular band from Antipodes who will close the shows at the Red Stage with their beautiful blend of reggae / soul / jazz. Another top Jamaican artist in our lineup is ANTHONY B, who confirmed his „stage dynamite” status already many times. This year we also put special attention to performing women – Jamaican singer TANYA STEPHENS boasted many hits and multi-selling albums. A real veteran of the British ska Jennie Matthias with her new band 1-STOP-EXPERIENCE will definitely amaze the crowd. Fans of clubby sounds inspired by roots will jump to the foundation artist for this genre of music – DREADZONE. Fans of dub will be delighted to see DUB SYNDICATE meeting up with maestro ADRIAN SHERWOOD. France and its top reggae scene in Europe is represented by their shining star of DANAKIL – numerous musical collective from Paris. Fans of Jamaican roots reggae cannot await the first Polish concert from the classic ROD TAYLOR. Young Jamaican lions, highly acclaimed in the whole world ROOTS UNDERGROUND will return to Ostróda. A nice surpise might be still unknown LAID BLAK, mixing reggae and ska with „urban music” in modern way.

Very popular Polish singer MARIKA will supervise good mood at the main stage working as the MC for the whole period of the event.

Plenty of attractions should be also expected in the sound system tent (Green Stage). The ground will shake with culty ABA SHANTI-I, CHANNEL ONE, ADRIAN SHERWOOD or PRINCE FATTY SOUND SYSTEM (in extended formula including HOLLIE COOK). Dancehall fans will get crazy on Saturday 11th, where under top Polish banner of DANCEHALL MASAK-RAH you will see a list of Polish singers and dancehall DJs (ZJEDNOCZENIE, SPLENDID, TALIB, SZTOSS etc.), as well as Jamaican headliners RDX and CHAM.

Green Stage will also give an opportunity to see pioneers of sound system formula in Poland – LOVE SEN-C MUSIC and JOINT VENTURE SOUND SYSTEM. Sensational will be a long awaited visit and DJ set of one of the singers for legendary Polish reggae outfit of 80’s R.A.P. – JACK SAPPHIRE. Crowds will definitely gather to see the sets of top Polish BAS TAJPAN or FEEL-X & GUTEK. Great vocal work can be expected after dancehall veteran from Jamaica PETER METRO as well as CALI P, ECHO RANKS or SOLO BANTON. The best Polish export dubstep master RADIKAL GURU and ROOTS REVIVAL will both provide deep heavy sound.

If it’s not enough, you can always check YELLOW STAGE – smaller system always under RISE UP! banner, playing during the whole event.

The Festival always enjoys appreciation and recognition from official Jamaican authorities. This is why Polish celebrations of the 50th anniversary of Jamaican independence, under the patronage of Jamaica’s Ambassador in Berlin and Honorary Consul of Jamaica in Poland, will take place here on 11th August.

As always, the festival will start with well attended Young Polish Reggae Bands Contest. A regular part of the festival program is also the Reggae University, consisting of meetings with various “roots culture authorities”.

This year the festival side activities are further expanded with some exhibitions and film screenings (including world famous documentary „Marley”).

Inside the open-air area of so-called “White base” (former military complex in the heart of the city), being a regular location for the festival, colorful stalls will be offering catering, beverages, records and all reggae related products. As usual, all those who are interested can stay at the festival campsite.

We try not to avoid new technologies and move with the times. There are plenty of multimedia at the festival site. As one of the very first Polish festivals in 2011 we introduced our own free application for Android/Iphone.

Over the years we have managed to effectively shorten the distance between Poland and the magical Jamaican island – home for the most beautiful music.

We provide fun & enjoyment but also focus on education.

Reggae is our inspiration.

4 days of all reggae genres

4-days tickets for Ostróda Reggae Festival 2012 are available through Ticketpro: www.ticketpro.pl and Ebilet: www.ebilet.pl
The prices are:
– 140 PLN till 31st May

Children up to 12 years old free entrance, based on a special armband received by parents at the ticket selling points at the site.