SURVIVAL OF THE SICKEST

What is it that we love about festivals? Barry Ashworth takes a light-hearted look at some essential festival survival pointers…

With the near-demise of the super-clubs in thew UK, festivals have emerged as the primary big dance music events. Each year there are more and more clogging up the calendar, and they’re constantly changing to beat the competition; understandably then, it can be difficult to know where to go, what to bring and what the hell to do once you get there. So, with Dub Pistols having played more festivals than you can shake a pair of wellies at, DJ Mag drafted me in to give you an expert’s guide to the muckiest season of the year.

Now everyone has their own taste when it comes to festivals; there are brilliant boutique events like Shindig, family-friendly (but with a kick) ones such as Blissfields, and of course big’ uns like Bestival and the daddy of them all, Glastonbury. But with festivals, size doesn’t matter!

What does make a good festival, then? I think it has to start at the top, with the promoter. They’ve got to be passionate about music and about what they do. When it comes to bookings, festivals boil down to two types: the corporate ones, where they just book the BBC Radio 1 (or even worse, the fucking Capital) playlist and they end up spending an absolute fortune; and then there are the ones I prefer, where the guys care about the music, understand what people actually want, and book quality music over chart music.

Places like Beatherder and Bestival are really well curated and that’s the most important thing — getting the music right.

After that it comes down to production. The days of V Festival and Reading just being able to put up two stages are well-and-truly over. You’ve got to build cities now; the top-end festivals are even bordering on theme parks. The key is to make it magical, make people feel like they’re stepping into another world. Even if you have all of the Radio 1 favourites, you have to put money into the production.

Big festivals like Boomtown, they just go crazy on the production and the theme, that’s what makes them amazing. Or take Lancashire’s Beatherder, for example — Dub Pistols have been on the bill there for the best part of 10 years, so I’ve seen them grow into one of the most formidable festivals going. They’ve got a stage in the woods — known as the Toil Trees — a Stonehenge-like circle called The Ring, and they’ve even built their own Fortress, which is one of the most incredible venues I’ve ever seen. Plus on top of that, the line-ups are always great and different from elsewhere. Two years ago the weather was absolutely baking all weekend, we got to close the festival and it was fucking mind-blowing.

Most festivals should have stuff other than the music going on too. Some have comedy stages that are wicked, or sometimes there are people that’ll just get up and perform. I love it when they stick a piano in the middle of a field and people just come along and start playing; it’s fucking amazing how many people can actually play really well… and then there are the shit ones, obviously! 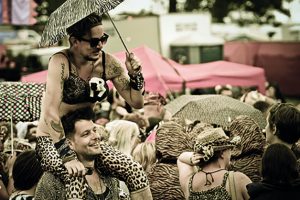 There are other elements that can really make or break a festival, which you might not necessarily think of straight away. Simple things, like those dreaded toilets, and security. Back when I first started going to Glastonbury as a kid, they didn’t have a fence, and half the fun was taking on the security to try and get in. We used to line up to charge against them with hundreds of other people, it was like a scene from a war film.

You’d make a break for it, and if you got caught you’d get dragged back and you’d go again in the second wave. It used to be quite a long dash, over the length of a football pitch, security on one side and you on the other, just going at it like a big game of Bulldog. Within three or four rushes you’d make it. But times have changed and now it’s essential to get a good security firm.

They’re not there to bully and terrorise people, they’re there to look after people — hopefully — and make sure people are safe, so an experienced team is a must.

One argument that’s coming up more and more often is camping versus non-camping. These one-day and inner-city festivals have their place of course (especially if you’re feeling a bit on the skint side), but for me it’s always worth saving a bit longer and going camping.

At the best festivals, everything takes place at night; sure it’s nice to chill out and lay around in a field during the day, but at night — that’s when all the magic happens. With Adele headlining Glastonbury this year (which I think is a real shame), once again it’s going to be all about the side antics, and it doesn’t get much better than the Hell Stage. The whole Shangri-La area is next level at night!

And even when everything’s closed, it’s back at the tents that festivals really come alive – that’s where you forge new friendships, where you entertain yourself with whatever madness takes your fancy, and ultimately where the community grows. For the best festivals, it’s so important for things to be going on all night so that people can stay up. They don’t want to go to bed, they’ve paid their money and they want to rinse it 24-fucking-hours for three days!

Take my favourite European festival, Electric Castle – they know how to party! It’s in a beautiful old castle in Transylvania and the weather is always fantastic, but there’s just something about the Europeans… my words can’t even do justice to how much the crowd go off — the place rocks!

There are places that plod and then there are places where the crowd are just fucking mental, it’s pure energy. I stood at the side of the stage last year to watch The Prodigy and I’ve never seen anything like it. This will be the fourth year Dub Pistols have played it and we’re actually the resident band there now, we’ve almost been adopted by the country so it’s pretty special. 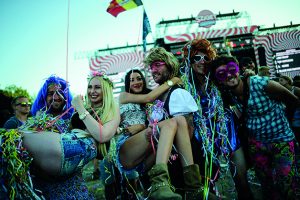 Of course, a good festival experience isn’t just down to the organisers, you — the punter — have got to take some responsibility too. You’ve got to have your survival kit. First off, make sure you’re fully loaded with drink (another reason I prefer camping fests). Whatever your tipple is, make sure you’ve got it in abundance, and bring other stuff for other people to share. In an ideal world this would mean you spend your weekend knacker-bare in a hot tub, with a glass of champagne, fucking rolling, but that might be pushing it a little for most.

Another good piece of kit is a camping stove (and, of course, some bacon and eggs), so you’ve got a breakfast in the morning, because for me a breakfast is essential. When it comes to who’s cooking though, you’re probably going to need to bring a chef too, because the chances of me cooking safely are non-existent.

Then you’ve got to have all your back-ups: migraine tablets, headache tablets, every kind of recovery aid that you possibly can. I’ve never been stuck without them, I’m too long in the tooth now and I know what’s going to happen. It’s not a good look laying around vomiting and holding your head, screaming “I’m gonna die!” But failing that, there’s always hair of the dog. I like to wake up and get a Bloody Mary on the go!

Don’t forget your fancy dress either. Bestival is great for that — not only is the event amazing, from getting the ferry over to the Isle Of Wight, to all the stages and the biggest disco ball the world — but the fancy dress there is something else. Come Saturday afternoon, everyone wanders back to their tents to change into their gear; it’s like Mr Benn, they emerge as someone else. Everyone takes on another persona and that’s it, game on!

The whole place is just lifted by it… plus it’s always brilliant watching a smurf dragging their sorry arse back to their tent in the morning, broken. Or the cast of Disneyland all looking really miserable and paranoid. I tend to just go with the theme; you can’t hold back, you’ve gotta get involved and do it in the best way that you possibly can, go the whole hog and make sure you stand out.

If all this comes together, there’s no doubt you’ll be in for the best weekend of your life (until next year, that is). I suppose to finish I should probably be an adult and recommend you try to get some sleep and remember to keep hydrated. Oh, and make sure you know where the medical tent is so you can find your mates!