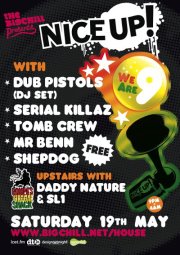 That’s right, it’s that time of year when we start to feel old, get embarrassed and would rather not talk about it again…nah, screw that…we’re only 9 years old!! Can you remember when you were 9 years old? BMX bikes, Star Wars, Rollerboots, Summer Holidays…best days of your life!! But, instead of a Wimpy party and a game of pass the parcel we’ve roped in a few friends to help us celebrate…

The Dub Pistols are one of the UKs most popular bands – headlining and playing festivals throughout the world (most recently playing live on Polish television on New Years Eve!) and their new album “Worshipping The Dollar” is set for release anytime now. Main trouble-causer Barry Ashworth will be headlining for us with a dancefloor blazing selection of reggae, breaks & drum & bass.
www.facebook.com/pages/Dub-Pistols/109447155740359

The Serial Killaz are without a doubt the biggest names in UK jungle/drum & bass right now – supplying remixes to Major Lazer, Toddla T & Rebel MC to name a few, aswell as a slew of massive bootleg remixes of some of the biggest names in dancehall. The last time they played at the Big Chill House for us they absolutely tore the roof off and created the first ever mosh pit on the dancefloor!
www.facebook.com/pages/Serial-Killaz-UK/386285912552

Tomb Crew have been creating noise in the scene for the last few years with their rowdy sets encapsulating everything from hip hop, house and techno to drum & bass and dubstep. They’ve recently stepped up their game in the studio with releases featuring Rubi Dan, Juxci D & Illaman and remixes for The Freestylers, Drop The Lime and a forthcoming one for NICE UP! records.
www.facebook.com/Tombcrew

Mr Benn is Bristol’s best kept secret – a fact that is soon to change with the release of his debut album on NICE UP! records. Featuring guest vocals from Tenor Fly, Top Cat, The Ragga Twins, Serocee and a whole load more, its due for release later this year. As well as his own productions, Ben’s DJ sets take in hip hop, dancehall, moombahton and drum & bass and always NICE UP! the area.
www.facebook.com/djmrbenn

Shepdog can be found propping up the bar and decks at most of London’s nightspots, as well as a being favourite at festivals up and down the land including Bestival, Glastonbury, Boomtown, Beatherder and more. His reggae/hip hop mash ups have gained him certain notoriety with DJs and crowds alike as have his energetic DJ sets packed with jungle, dubstep, breaks & house.
www.facebook.com/deejayshepdog