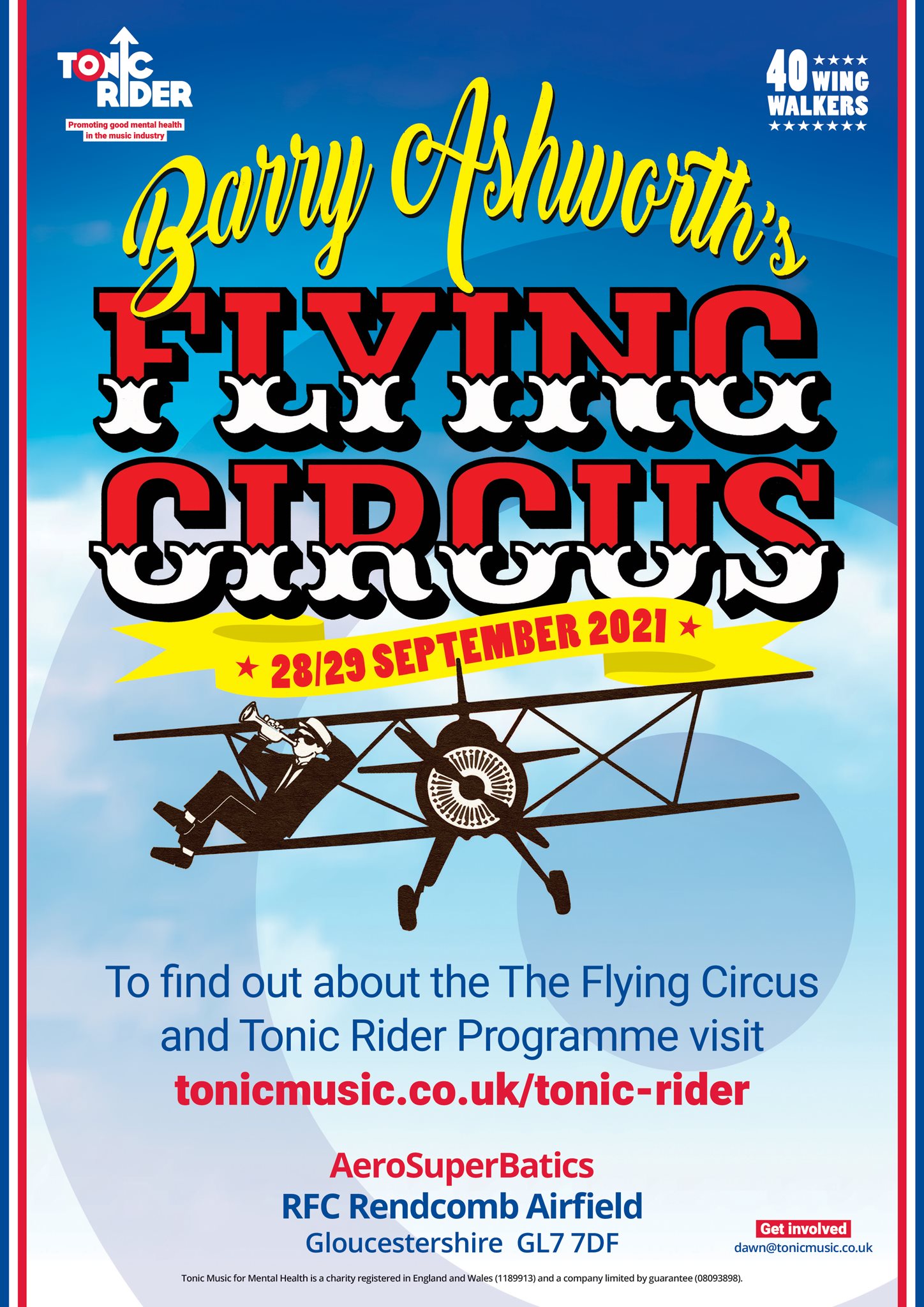 Tonic Music for Mental HealthBarry’s Flying Circus
8h · Cirencester ·
BARRY’S FLYING CIRCUS 2021 ANNOUNCEMENT
Tonic Music for Mental Health patron and Dub Pistols front man Barry Ashworth announced today he will take to the skies for the charity’s 3rd annual flagship fundraiser Barry’s Flying Circus, aiming to raise £80k in aid of Tonic Rider, a unique, free mental health programme for the music community.
Taking place across 28th and 29th September at Aerosuperbatics WingWalkers in Cirencester, the fundraiser sees Barry Ashworth host a ‘Collective Wing Walk for Mental Health’, with over 40 fellow wing walkers, including Bez (Happy Mondays), Sian Evans – Kosheen, Nick Reynolds (Alabama 3), Derran Brownson (EMF), heroic amputee Jim Ashworth-Beaumont and more being confirmed.
Barry’s Flying Circus will see each wing walker on top of a Boeing Stearman Biplane, performing a series of flypasts, zoom climbs, steep dives and banks and even loop-the-loops. Last year’s wing walk raised over £36,000 with 18 wing walkers. This year’s fundraiser will be even more ambitious and will see Barry and his team of wing walkers collectively fundraise via crowdfunder www.justgiving.com/fundraising/barrysflyingcircus, with a target of £80,000 that would smash the previous record.
Having recently lost friends and fellow artists to suicide, Barry Ashworth knows only too well the pressures and consequences of a career in music. He calls on supporters to donate to support the fundraiser: “I’m honoured to launch my Flying Circus Fundraiser this year of all years, because I know the difference it makes to vulnerable people in music, like me, who need help and support to recover as we come out of lockdown. I’ve experienced the darker side of the music industry – addiction, depression, anxiety, and exhaustion, so if my fundraising for Tonic Rider with our wing walk for mental health can help save just one life, it will have been worth every second I have invested. We need to hit our £80k target, so please give what you can today to ensure the music community get the mental health support they so need and help create lasting change for the industry.”
Bez will be wing walking to raise funds for Tonic on his second consecutive year, he added his support for the cause “Everyone going through life suffers highs and lows, and when you’re at one of those low points, it’s good to know that there’s a bit of support out there for you. The most important thing is not being afraid to speak out and talk, because when you share your problems, it always lightens the load.”
Barry Ashworth’s brother-in-law Jim Ashworth-Beaumont, a Scottish prosthetics doctor who lost his arm in a London road accident in 2020 said “Barry Ashworth is a larger-than-life extrovert on every stage he graces, he is also my brother-in-law, and we know the courage and constant work it takes every day as an artist living a precarious life at the best of times. The last 12 months have been particularly devastating for the musicians who entertain us and enhance our lives so much. When Barry asked me to join him on his Flying Circus Fundraiser, I hopped at the chance, even though I’m still recovering from the life-changing injury that almost killed me. Under isolation in critical care for months, Barry recognised my depths of despair and mobilised his fans to support me. Experiencing the kindness and support of so many strangers gave me the strength to believe I could stand, learn to walk again and soon wing walk. Having the opportunity to support musicians through fundraising for Tonic Rider at such a critical time, by walking in the sky no less, is not only incredibly symbolic, but offers me the chance to return the love in a big way.”
The fundraiser for Tonic Rider will allow the charity to continue providing free, direct, practical mental health support, such as virtual peer groups led by Adam Ficek (psychotherapist, Babyshambles), emotional coping skills, Acceptance Commitment Therapy (ACT), suicide prevention education, mindfulness, and an array of digital resources and advice for musicians and venues through the lockdown and beyond into 2022.
Tonic Rider will also be working virtually with venues and eventually rolled out physically to green rooms, festivals and Night Time Industries Association (NTIA) members, with the aim to include the Tonic Rider on all rider lists, venue posters and via ‘Tonic Hubs’ at partner live events. Tonic Rider also launches a research study led by Jeordie Shenton (PhD researcher, Goldsmiths) and Adam Ficek (Psychotherapist, DPsych researcher) into the mental health of music industry professionals, to inform ongoing preventative work and support services.
www.justgiving.com/fundraising/barrysflyingcircus
#Barrysflyingcircus #Tonicrider #Mentalhealth #Musicindustry — at Aerosuperbatics WingWalkers